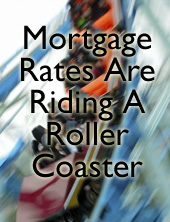 Last week was a roller-coaster ride in the conforming mortgage market.  After opening the week by making new, all-time lows, markets reversed sharply on better-than-expected data in manufacturing and housing, and data from overseas.

Last week marked the first time that mortgage rates worsened 3 days in a row since late-April.

The combination of the jobs report not posting as poorly as predicted, and light volume because of Labor Day, pushed rates higher by as much as a quarter-percent in some markets.

On the week, conforming mortgage rates were unchanged but, depending on when you locked, there was great disparity.  Tuesday’s rates were much better than Friday’s.

Meanwhile, this week, with little data due for release, mortgage rates should remain unpredictable, moving as a result of momentum and outside influence. It makes for dangerous times for rate shoppers.  Mortgage rates may fall, but, then again, they might rise, too.

Keep in mind that markets are in the midst of a 19-week rally and rates can’t fall forever. Mortgage bonds are likely overbought so when the selling begins, pricing should worsen quickly.  This will cause mortgage rates to spike.

Therefore, if you’ve been shopping for a mortgage or are just wondering if the time is right to refinance, call your loan officer and work the numbers together. Refinancing won’t make sense for everyone, but it may make sense for you.