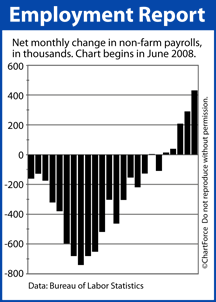 The May Non-Farm Payrolls report fell well short of expectations while ongoing jobless claims rose.  The two combined to cast doubt on the speed of the U.S. economic recovery, hurting stocks and helping bonds.

Conforming and FHA mortgage rates dropped for the fifth time in six weeks and, once again, rates are trolling back near all-time lows.

No doubt you’ve heard that before — “mortgage rates at all-time lows”.  Mortgage rates have dipped to these levels four times in the last 19 months. However, on each occasion, it wasn’t long after touching bottom before rates reversed higher.

This week, rates could stay low for a matters of hours, or days — we can’t really know. Especially with no “major” data due for release.  Instead, most of this week’s economic news is incidental. That means that mortgage markets will move based on trader sentiment and “gut feel”.

The good news is that the market momentum is currently in the rate shoppers’ favor. We entered the weekend with rates falling and they look poised to open Monday no worse.

Here’s a look at what’s ahead this week:

Market sentiment is a strange animal. One minute it can be your friend and, the next, it can be your enemy. Opinions change swiftly on Wall Street and so do mortgage rates.

If you’re still not locked in, consider making your move. Rates have a lot farther to rise than they do to fall. You won’t want to be on the wrong side of the bet when rates start rising.