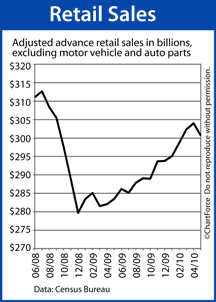 Mortgage markets posted four good days last week and one awful one.  Unfortunately for rate shoppers , that one bad day outweighed the gains of the other four and mortgage rates worsened on the week overall.

Despite re-touching all-time lows on Tuesday and Wednesday, Conforming and FHA mortgage rates moved higher on the week.

There wasn’t much domestic data on which for mortgage markets to move so rates took their cues from global economic activity. Strong data from Japan and China, plus an improving outlook from the Eurozone, sparked optimism among Wall Street investors. Cash poured into the stock market and it happened at the expense of bonds — including the mortgage-backed ones.

It’s the primary reasons rates rose and not even the worst Retail Sales report in 8 months could undue the damage.

This week, there’s cause for rates to rise again with Wednesday emerging as a “data day”.

First, at 8:30 AM ET, the government releases two key housing statistics and one major gauge for inflation — Housing Starts, Building Permits and Producer Price Index, respectively.  Strength in any or all three should lead mortgage rates higher.

Mortgage rates remain unnaturally low and a lot of Americans have taken advantage already. If you’re a homeowner and you’ve wondered whether or not a refinance makes sense, talk to your loan officer straight away. Low rates like this can’t last forever so lock one in while you can.