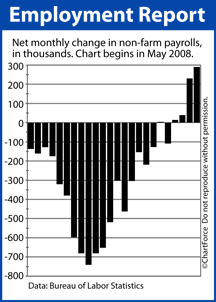 Mortgage markets worsened last week as concerned of a global debt crisis lessened and stock markets rebounded. The gains in stocks came at the expense of bonds — including mortgage bonds.

Conforming and FHA mortgage rates rose for the first time in 5 weeks, pulling mortgage pricing off its best levels of the year.

This week, mortgage rates may rise even more. In addition to the release of May’s jobs report and consumer confidence data, fears of broader economic slowdown appear to be easing.

Day-by-day, the chances of rates rising are real.

Then, on Wednesday, Pending Home Sales and Auto Sales data is released for last month. Both items are “big ticket” and, again, reflect on consumer confidence. Strong readings should be rough on rates.

Next, on Thursday, jobless claims data hits the wires along with worker productivity stats.  Normally, these two releases don’t carry much weight, but with the jobs market in focus this year, markets will be watching for clues about Friday‘s big report — the May Non-Farm Payrolls.

Anything can happen when the jobs report is released.

In April, an estimated 290,000 jobs were created and, in May, economists think more than a half-million people re-entered the workforce.  This is good for the economy, of course, but can drag on mortgage rates.  If job growth even comes close to the 500,000 marker, mortgage rates could zoom higher.

Mortgage rates moved higher last week but are still very low. If you’ve been thinking about refinancing your mortgage, you probably shouldn’t put it off much longer.  Talk to your loan officer today — the longer you wait, the more that rates can rise.