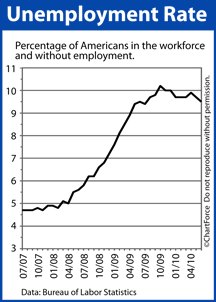 Major stock indices fell to 2010 lows in response to a weak jobs report among other data points, forcing worldwide investors into the relative safety of U.S. government-backed bonds.  This category includes mortgage-backed bonds and the extra demand helped to drop rates.

Low rates mean low payments and you can’t know your options until you ask.

This week, mortgage rates may move slowly. There’s very little data set for release because markets were closed Monday in observance of Independence Day, and because the second calendar week of a month is traditionally data-slow.

Tuesday, a consumer confidence study is published; Thursday, jobless claims plus consumer credit levels hit; and, Friday, we’ll see wholesale inventories.  That’s about it.  None of these reports are particularly important but, in aggregate, the numbers can show whether the economy is expanding or contracting.

In general, evidence of an expanding economy should cause mortgage rates to rise.  In a contracting economy, rates are likely to fall.

Actual mortgage rates will vary by borrower, based on property type, credit score, and home equity, but if you haven’t talked to your loan officer about a refinance into today’s rates, it’s likely worth the time for a phone call.  Once mortgage rates start to reverse higher, they’re expected to reverse quickly.

You’ll want to act before that move occurs..