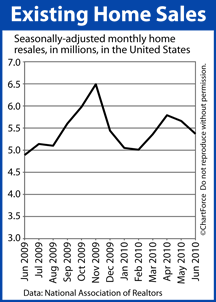 Mortgage rates rose last week, but only slightly. Rate are still hovering near their lowest levels of all-time.

Of the bigger stories last week was Existing Home Sales. As reported by the National Association of Realtors®, sales volume was down in June and home supplies were up. But figures were a bit better than expected, giving some hope for housing.

Notably, the number of move-up buyers outnumbers first-timers and the national median home price rose, suggesting that mid-to-upper home prices are getting some support.

This week, the market gets additional two pieces of housing data to add to the mix:

Also this week, there’s two consumer confidence reports, the Fed’s Beige Book, and late-in-the-week inflationary data.  Mortgage markets should remain volatile with so much news headed down the pipe.

It’s too soon to declare the current 3-month rally over, but it’s been 3 weeks since rates dipped. This can be a signal that mortgage rates have finally bottomed and that it’s time to lock your rate.

If you’re floating a mortgage rate, or thinking about a refinance, it’s time to get locked in. Rates may drop this week, but then again, maybe they won’t.  There’s little sense gambling on a bet as big as a mortgage.