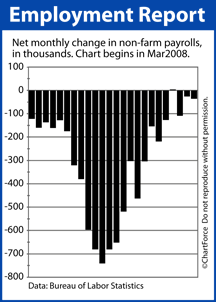 Most of the losses occurred Wednesday in what was the worst 1-day mortgage market performance in more than 6 months. Even Friday’s rally could barely dent the losses. Most of the movement was tied to geopolitical concerns and worries of a ballooning federal debt load.

The best time to lock a conventional or FHA mortgage rate last week was Tuesday morning.

This week, markets should remain volatile. There’s a large set of economic data due for release, plus trading volume will thin as the week goes on because markets are closed Friday for Good Friday.

Coincidentally, Friday is also the day that the March jobs report is released.

The non-farm payroll report is expected to show net job growth of 187,000 in March. This is a large number as compared to last month’s net loss of 36,000 job. However, analysts are already dismissing March’s numbers as skewed by both the bad storms of February, and the temporary hiring of Census workers.

In most months, major job growth would be bad for mortgage rates. This month, that won’t be the case. It will take a figure north of 200,000 to cause rates to rise and the higher the actual number, the more that rates will respond.

Also this week, on Wednesday, the Federal Reserve’s $1.25 trillion program to support mortgage markets sunsets. Fed insiders estimate that the program dropped rates 1 percent since its inception in 2008. It’s reasonable that mortgage rates will rise after its end, therefore.