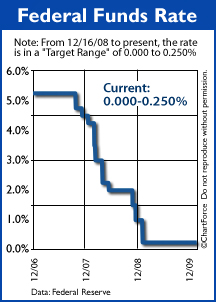 Oddly, last week’s most prominent mortgage-related story wasn’t the most influential one.

On Wednesday, the Federal Open Market Committee adjourned from a two-day meeting. It voted to leave the Fed Funds Rate unchanged from its current target zone of 0.000-0.250 percent. This wasn’t news, per se — markets expected the “no change” vote.

However, in its accompanying press release, the Fed appeared more rosy in its economic outlook, citing improving labor markets and low levels of inflation. Results like this are a mixed bag for rate shoppers, but is generally welcomed as good news.

Rates were unchanged after the FOMC release.

Debt concerns should remain in focus this week. Furthermore, there’s a bevy of domestic data that could swing rates in either direction, too. Most notably, watch for Tuesday’s housing data, Wednesday’s inflation data, and Thursday’s consumer confidence data. Each can be a powerful influence on rates.

There will be less volume on Wall Street because of Christmas and less volume tends to spur mortgage rate volatility. Be wary of swings in either direction.

Markets close early Thursday and will be closed Friday.