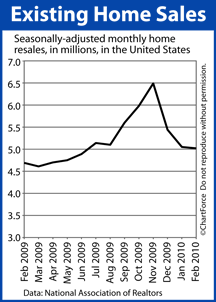 Well, because the U.S. government backs the bonds of Fannie Mae and Freddie Mac, mortgage bonds tend to fit the “less risky” description and as Iceland’s volcanoes shut down air traffic in Europe, mortgage bonds benefited.

That was early in the week.

Then, on Friday, when the SEC announced fraud charges against Goldman Sachs, a second wave of bond buying began as Wall Street fled the stock market. Mortgage rates fell a second time and the improvement carried through the market’s weekly close.

Conforming and FHA rates are as low as they’ve been since March.

This week, there’s not much data due until Thursday, but even Thursday’s releases won’t make a huge impact on rates.

The bigger risk to home buyers this week than data is the reversal of the safe haven buying patterns that have kept mortgage rates down over the past 10 days. Keep an eye on the markets and your loan officer on speed dial. Markets can — and do — change quickly.