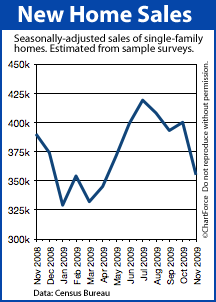 A “new home” is a home that is newly-constructed; not bought as a resale.

In a lackluster showing, New Home Sales dropped 11 percent in November, falling to the lowest levels since April. Furthermore, the all-important “months of supply” climbed by a half-month to 7.9.

The press pounced on the figures and if you only read the headlines, you’d think that housing had cratered. Some of the angles were quite bold, even:

These headlines, although technically accurate, only tell half the story, however. The other half relates to November 30’s role as the original First-Time Home Buyer Tax Credit ending date.

See, different from home resales, when a contract is written on a newly-built home, the home is rarely finished. According to the Census Bureau, just 1 in 4 new homes are sold “move-in ready”. The other 3 of 4 are in various stages of construction when a buyer signs on the dotted line.

Some have yet to break ground, even.

Regardless, it’s at this date of signing that the Census Bureau counts the home as “sold” — not at the actual closing. This is the main driver of the November New Home Sales data dip.

First-time home buyers would have risked up to $8,000 in federal tax credits if they bought a newly-built home and it wasn’t ready for move-in by November 30, 2009. And it wasn’t until November 5 that the credit was officially extended.

There’s always more to the story than the headline. Sometimes, you have to dig deeper. Looking back over 10 months, the housing market is on a steady course of improvement. November’s New Home Sales data — although weak — is not terrible.