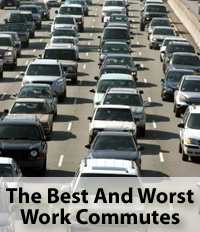 According to the Census Bureau, 2.8 million people commute to work 90 minutes or more each day, in each direction.

Now, your daily commute may not be as long, but time spent in cars, trains and buses is time away from work and from family. Drive-time can affect a person’s Quality of Life and it’s one reason why Forbes Magazine’s Best and Worst Commutes is worth reviewing.

The Top 5 Commutes, as compiled by Forbes:

The bottom 5 are Tampa-St. Petersburg, Detroit, Atlanta, Orlando, and Dallas-Forth Worth.

Long commutes shouldn’t deter you from moving to a particular city, but the potential commute should be consideration. Before making an offer on your next home, make a rush-hour commute to work from your potential new neighborhood. Then imagine doing it every day.

You can read the complete Forbes list of Best and Worst Cities for Commuters on its website.