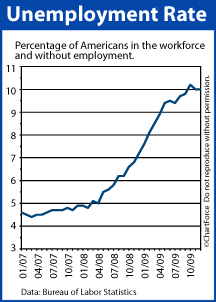 Despite the headlines, it’s important to remember that December’s jobs report wasn’t all bad news.

Sure, the economy shed 85,000 jobs last month and the Unemployment Rate failed to dip below 10%, but for home buyers and rate shoppers , the news was just fine.

There is two sides to every economic coin.

Since early-2008, the U.S workforce has been closely tied to home financing. As the economy slowed and jobs were lost, Wall Streeters pulled money from the risky stock markets and moved it to of the relative safety of bond markets, instead.

And this is why Friday’s non-farm payrolls report was so good for buyers.

But now, after December’s jobs report returned to the red, Wall Street is forced to rethink its position. Safe haven buying is back and mortgage rates are lower because of it.