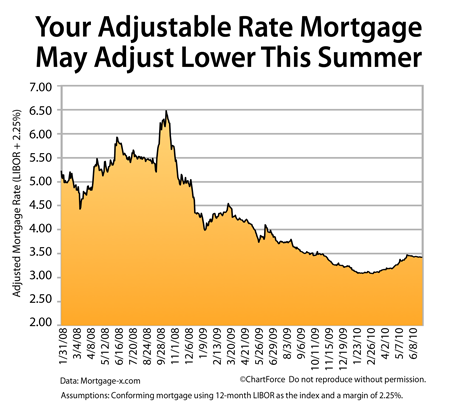 If your adjustable rate mortgage is due to adjust this year, don’t go rushing to replace it just yet. Your soon-to-adjust mortgage rate may actually go lower. It’s related to the math behind the ARM.

The starter period will vary from 1 to 10 years, but at the point of first adjustment, conventional ARMs become the same. A homeowner’s new, adjusted mortgage rate is determined by the sum of some constant, and a variable. The constant is most often 2.25% and the variable is most often the 12-month LIBOR.

LIBOR is an acronym standing for London Interbank Offered Rate. It’s the rate at which banks borrow money from each other and, lately, LIBOR has been low. As a result, adjusting mortgage rates have been low, too.

Based on the math, it may be wise to just let your ARM adjust this year. Or, depending on how long you plan to stay in your home, consider a refinance to a new ARM.  Starter rates on today’s adjustable rate mortgages are exceptionally low , as are the rates for fixed rate loans.

Either way, talk to your loan officer about making a plan. With mortgage rates as low as they’ve ever been in history, homeowners have some interesting options. Just don’t wait too long. LIBOR — and mortgage rates in general — are known to change quickly.