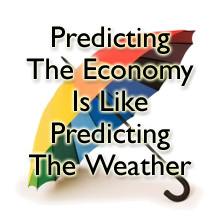 As 2009 was ending, the “experts” were busy making forecasts about the U.S. economy and what to expect in 2010.

With respect to the housing markets, two predictions were made again and again:

Well, it’s July 1 and the year is half-over.  Both predictions are proving to be incorrect. Home values are rising in most markets and mortgage rates are down. Way down.

It reminds us that economists are much more skilled with analysis of the past versus predictions of the future.

A pile of data can only get you so far.

Think of housing market predictions like watching a local weather forecast. A meteorologist can look at the radar and tell you that rain is coming, but it’s never with 100% certainty.  There is always a chance of change.

The housing market is the same way.  Just as the U.S. economy is unpredictable, so are housing prices, and so are mortgage rates.

Therefore, when you have a personal finance decision to make, evaluate your options based on the information at hand today rather than an educated guess about the future. The future, after all, is subject to change — despite what the experts forecast.