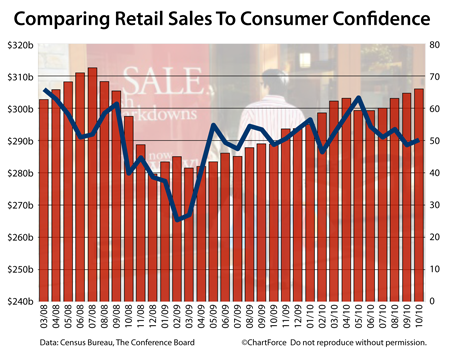 If consumer spending is a key to economic recovery, the nation is on its way.

Consumer confidence is rising, too. Though still below the long-term trend, confidence in the future up-ticked in October.

The current confidence reading is now double the low-point from February 2009.

It’s no surprise that both Retail Sales and Consumer Confidence are higher. They correlate in a common-sense-type manner. When consumers are more confident in the economy, they’re more likely to spend their money. This, in turn, leads to more purchases and rising retail receipts.

Because consumer spending accounts for two-thirds of the economy, spending growth leads to economic growth. But it’s been a lack of growth that’s kept mortgage rates this low.

When the growth starts, the low rates end. It’s why mortgage rates have added as much as 1/2 percent over the past 10 days. Consider the recent “good news”:

The days of 4 percent, 30-year fixed rate mortgages may be nearing its end.  If you’re still floating a mortgage rate or thinking of buying or refinancing, consider the impact of rising rates on your budget.

The time to act may be sooner than you had planned.