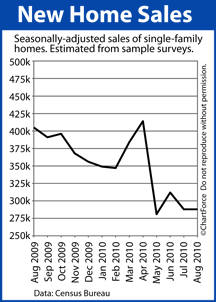 After an upward revision to July’s data, New Home Sales remained unchanged at 288,000 units in August. It marks the second-lowest number of units sold in a month since 1963, the year government started its record-keeping.

At the current pace of sales, the newly-built home inventory would be depleted in 8.6 months.

The August New Home Sales was weaker-than-expected, but both Wall Street investors and Main Street economists are shrugging it off. The numbers were foreshadowed by weakening housing figures from earlier this summer.

Together, these three data points suggest that the market for new homes will be soft through at least this month.

With New Home Sales fading and colder months ahead, it may be an opportune time for home buyers to look at new construction. Builders are eager to move inventory and the cost of materials remains low.

As home supplies dwindle and mortgage rates rise, finding “great deals” in new construction will undoubtedly get tougher. Take advantage of today’s market conditions, combined with builder pessimism. It may be the right combination at the right time to get that new home for cheap.