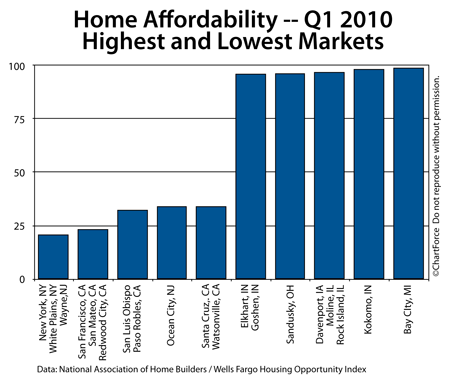 With home prices still relatively low and mortgage rates trolling near their all-time best levels, it’s no surprise that home affordability is extraordinarily high in most U.S. markets.

According to the quarterly Home Opportunity Index as published by the National Association of Home Builders, more than 72 percent of all new and existing homes sold between January-March 2010 were affordable to families earning the national median income.

It’s the second highest reading in the survey’s history.

Of course, on a city-by-city basis, home affordability varies.

In the first quarter of 2010, for example, 98.7% of homes sold in Bay City, Michigan were affordable for families earning the area’s median income and in Indianapolis, the percentage was almost 95 percent.

Indianapolis has held the top quarterly ranking for close to 5 years now.

On the opposite end of the spectrum, the New York-White Plains, NY-Wayne, NJ region earned the “least affordable” metropolitan area for the 8th consecutive quarter.  Just 20.9% of homes are affordable to families earning the local median income.

The rankings for all 225 metro areas are available on the NAHB website but regardless of where your town ranks, home affordability remains high as compared to historical values but it likely won’t last long.  Home values are recovering in many markets and mortgage rates won’t stay this low forever.

All things equal, buying a home may never come this cheap again. If you were planning to buy later this year, consider moving up your timeframe.