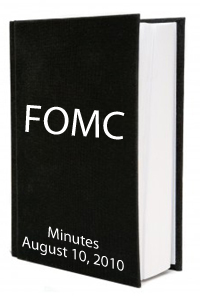 Home affordability took a slight hit this week after the Federal Reserve’s release of its August 10 meeting minutes.

The “Fed Minutes” is a lengthy, detailed recap of a Federal Open Market Committee meeting, not unlike the minutes published after a corporate conference, or condo association gathering. The Federal Reserve publishes its meeting minutes 3 weeks after a FOMC get-together.

The minutes are lengthy, too.

At 6,181 words, August’s Fed Minutes is thick with data about the economy, its current threats, and its deeper strengths. The minutes also recount the conversations that, ultimately, shape our nation’s monetary policy.

It’s for this reason that mortgage rates are rising. Wall Street didn’t see much from the Fed that warranted otherwise.

Among the Fed’s observations from its minutes:

Now, none of this was considered “news”, per se. If anything, investors were expecting for harsher words from the Fed; a bleaker outlook for the economy. And, because they didn’t get it, monies moved to stocks and mortgage bonds lost.

That caused mortgage rates to rise.

The Fed meets 8 times annually. Its next meeting is scheduled for September 21, 2010.  Until then, mortgage rates should remain low and home affordability should remain high. There will be ups-and-downs from day-to-day, but overall, the market is favorable.