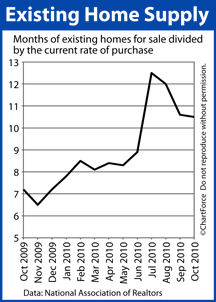 Housing statistics have been wildly inconsistent during that period.

For the future of housing markets, though, it’s encouraging that first-time and investment property buyers were both outnumbered by “move-up” buyers; buyers that have sold their respective homes in favor of larger ones. It’s the move-up buyers that power housing.

In October, buyer profiles broke down as follows:

As a point of comparison, first-timers represented 50 percent of all purchases in October 2009.

For home buyers, October’s Existing Home Sales report is neither weak nor strong. It signals that, with mortgage rates low and home affordability high, housing may be reaching some form of balance. Because — although home sales are down — home supplies are down, too.

We can infer that buyers outnumber sellers, but probably not by much. In most areas, negotiation leverage is still up for grabs.

At the current pace of sales, the complete housing stock would be depleted in 10.6 months.