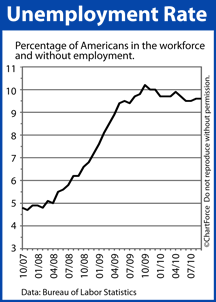 Mortgage markets improved last week on mixed messages about the economy, and a growing belief that the government will move to stimulate the economy.

According to Freddie Mac’s weekly mortgage market survey, average mortgage rates nationwide fell to new all-time lows last week. On the other side of that point, however, is that the accompanying “points” for today’s low rates have climbed to their highest levels of 2010.

In other words, mortgage rates are down, but closing costs are up.

There were two main stories driving mortgage rates last week. The first was the Federal Reserve.

Although nothing has been said specifically, markets are speculating that the government will add new layers of market support to spark the economy.

The prevailing thought is that — if there’s intervention — the Fed will buy treasuries and mortgage bonds, driving up prices and pushing down yields. Rates dropped last week in anticipation of such a move.

Economists expected the economy to shed 5,000 jobs in September. Instead, it lost 95,000, anchored by the elimination of temporary census workers and job losses in local governments. The private sector didn’t fare so poorly, adding sixty-four thousand jobs. However, that, too, fell short of expectations.

The results contributed to a mortgage market rally already in-process.

This week, there’s a number of releases that should keep mortgage rates on the move — up and down — including Fed Minutes (Tuesday), Producer Price Index (Thursday), and Consumer Price Index, Retail Sales and a confidence survey (Friday).

Mortgage rates are low and may not stay that way. If you’re floating a mortgage rate, or wondering whether now is the time to lock, talk to you loan officer. Rates are expected be volatile this week.