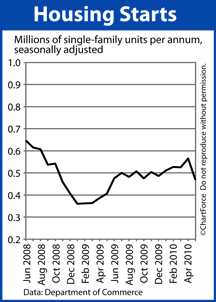 There’s concern about a potential economic slowdown for the months ahead and it may be well-founded.

Despite an improving jobs situation and booming retail sales, households are less optimistic about the future and so is the Federal Reserve. In its post-meeting minutes released last week, the Fed revised its U.S. growth estimates downward for 2010 and 2011.

For rate shoppers , this is excellent news.

Because of the weakness, conforming mortgage rates fell again last week, extending the current rally in rates to 16 weeks. Mortgage rates are lower than at any time in measured history.

This week, data will be housing market-heavy and mortgage rates could rise or fall.

Strength in any, or all three, of these housing-related reports should push mortgage rates higher on higher hopes for the economy. Weakness, on the other hand, should have the opposite effect.

Overall, though, mortgage markets are trending better.  Momentum is in effect and refinance activity is soaring. That said, it doesn’t mean that rates won’t rise — they could absolutely. It just takes a change in market sentiment. And that could happen quickly.

Mortgage rates are artificially right now so even the slightest jolt could cause them to spike. It would be similar to what happened in June 2009 when rates rose 1.125% in just 10 days’ time. Therefore, if you’re shopping for a mortgage and like the rate you’ve been quoted, consider locking in as soon as possible.