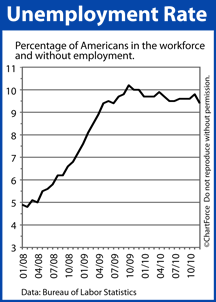 According to Freddie Mac’s weekly mortgage rate survey, the national average rate for a 30-year fixed rate mortgage is 4.77 percent with an accompanying 0.8 points required.

This week, with no new data due for release, look for last week’s two biggest stories — jobs and debt — to carry forward. The first such story relates to jobs.

It turned out, they were not.

Accounting for revisions to past months’ data, December’s jobs data was in-line with expectations, resulting in a mortgage rate retreat that lasted all day Friday. That momentum should carry forward into the early part of this week.

The second story is tied to safe-haven buying.

The U.S. mortgage market benefited from growing concerns within the Eurozone that Portugal could default on its debt. The story emerged three weeks ago when Portugal’s debt was downgraded. It picked up steam last week after a weak debt offering. It’s a similar beginning to what transpired in Greece last spring.

Mindful of their respective risk, worldwide investors chose to shift risk toward safer asset classes which includes, of couse, mortgage-backed bonds. This week, those risks will remain and the flight to quality assets should continue. Mortgage rates will benefit.

Given the likelihood that mortgage rates will fall this week, it may be tempting to let your mortgage rate float. That strategy could prove foolish.

Mortgage rates fell to historic lows in 2010 and sprung higher at the first possible opportunity. Rates remain at ultra-low levels and have lots of room to rise. This week, consider buying on the dip. It may be the last chance you get.