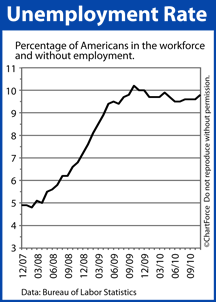 Mortgage markets lost ground last week on growing optimism for the economy, a poor run for the dollar versus the euro, plus the lingering concerns that inflation will grip the U.S. long-term.

Conforming mortgage rates rose for the fourth week in a row, stymying rate shoppers and raising the effective cost of homeownership for new buyers in need of a mortgage.

After a spectacular run that drew 30-year fixed rates to near 4.00, mortgage rates have returned to their highest levels since late-June.

Last week was heavy on news. Bond traders were hit with the Beige Book; with the ADP Challenger Report; with the ISM Manufacturing Report; and, with Pending Home Sales data for October. Each release moved markets.

According to the government, 39,000 net new jobs were created in November, and September’s and October’s data was revised higher by a combined 38,000.  The sum of these figures fell well short of Wall Street expectations — investors has expected 146,000 net new jobs in November.

As a result, mortgage rates made their largest, intra-day improvement of the year Friday morning, although they slid higher through the afternoon. Rates fell 1/8 percent Friday as compared to Thursday and rate shoppers may see that momentum carry forward into this week.

Fed Chairman Ben Bernanke gave a televised interview Sunday evening in which he said, among other things:

Both comments should help to allay inflation concerns, and may lead mortgage rates lower this week. If you’re floating a mortgage rate, keep a watchful eye on markets and be especially wary if mortgage rates start to rise again. November was rough on mortgage bonds.