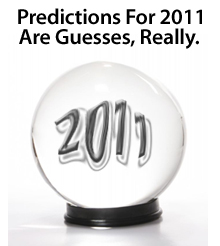 With 2010 coming to a close, the “experts” are out in full force, making predictions for next year’s housing and mortgage markets on business television and in the papers.

Predictions for 2011 are wide-ranging:

Television can make that task even more difficult at times.

As an example, when a well-dressed economist goes on CNBC and presents a clear, succinct argument for why home prices will fall on 2011, we’re inclined to believe the analysis and conclusion. After all, the outcome seems plausible outcome given the facts. But then, immediately after, a different economist presents an opposite argument — that home prices will rise in 2011 — and her analysis seems sound, too.

Last year, the government group predicted mortgage rates to 6 percent in 2010. That never happened, of course. Instead, conforming mortgage rates dropped over a 7-month period this year to levels best be described as “historic”.  Freddie Mac couldn’t have been more wrong.

So, what’s a homeowner to believe?

About the only thing that’s certain right now is that mortgage rates remain low by historical standards, and that home prices do, too. Also, that both housing and mortgage markets appear to be riding momentum higher into 2011.  This suggests that it will be more expensive to buy and finance a home by the end of 2011.

Until that time, however, predictions are just guesses.