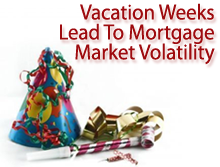 Mortgage markets made a 4-day losing streak last week on thin holiday volume and overall economic optimism. It was awful news for rate shoppers because mortgage rates were higher every day last week.

The holiday-shortened week marked the third out of 4 during which rates worsened and last week’s action happened to be especially harsh. Monday’s action was the worst for rates since July, for example.

Tuesday’s was only slightly less worse.

Today, conforming, 30-year fixed mortgage rates have reached at a 15-week high — well off the lows set in early-December.

Normally, when mortgage markets worsen this badly, this quickly, it’s because of strong economic data, or growing inflationary expectations. Last week saw neither.

And yet — stock markets gained. All 10 sectors improved and they did so at the expense of mortgage bonds.

This week is again holiday-shortened so expect the same low-volume, high-volatility trading as last week. There’s few data releases save for Tuesday’s Case-Shiller Index. Therefore, watch for momentum trading in either direction.

Markets close early Thursday and re-open Monday, January 4, 2010. If you need to lock a rate, make sure of your loan officer’s hours.