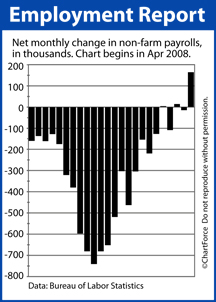 Pricing was influenced on several fronts including better-than-expected economic data, the end of the Federal Reserve’s mortgage buyback program, and a short trading week.

The data from most anticipated story from last week — the jobs report — included a few good-for-the-economy surprises.

In general, what’s good for the economy is bad for mortgage rates and that’s one reason why rates spiked Friday. Employment is a keystone in the economic recovery and mortgage markets reacted accordingly.

This week is short on data but there’s a lot to move the markets.

For one, the Federal Reserve has called an emergency meeting to review its Discount Rate policy. The meeting is called for today, Monday April 5, at 11:30 AM ET. It’s unknown exactly what the meeting will cover, but if new monetary policy is made, expect that mortgage rates will be influenced.

Also worth watching this week are the technical trading patterns present in the mortgage-backed bond market.

Unlike fundamental trading in which markets move on data and projections, technical trading is how markets move based on patterns over time. The two methods co-exist on Wall Street but, occasionally, technical forces can be pronounced, leading markets to lurch up or down. This week may be one of those times.

Mortgage pricing is far below its 200-day moving average, resting slightly north of a key support level. If pricing worsens this week and bonds fall below the support level, mortgage rates could easily tack on quarter-percents or more per day until the market refinds its balance.

Overall, it’s a week you don’t want your rate to be floating. Sure, rates could improve, but there’s a lot more room for them to worsen.