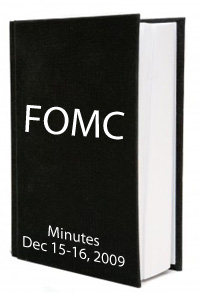 Both mortgage rates and home affordability took a turn for the better Wednesday after the Federal Reserve released its December 15-16, 2009 meeting minutes.

The Fed Minutes is a follow-up piece to the post-FOMC meeting press release. But whereas the press release is succinct and to-the-point, the minutes are lengthy and often meandering.

But these “extra words” aren’t superfluous. They’re actually very important to homeowners. Because the Federal Reserve’s internal debates help to shape Wall Street expectations, it doesn’t take much for those conversations to have a trickle-down effect on Main Street.

For example, after the December meeting, the Fed said that economic growth is steady, inflation is in check, and an orderly wind-down of mortgage market support was underway. A look at the minutes, though, showed some disconnect.

Some Fed members believe rising commodity prices could lead to stronger-than-expected, and others think that improvement is housing could be “undercut” by a pull-back in government stimulus.

Overall, the Fed appears optimistic about the economy, but not as optimistic as on December 16. Mortgage markets responded favorably to the minutes and mortgage pricing improved.

Although rates remain higher as compared to early-December, pricing has been on a good run this week. If you’re under contract for a home or just looking to refinance, now may be a good time to lock.