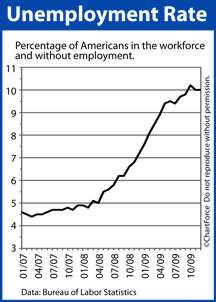 On the first Friday of every month, the U.S. government releases its Non-Farm Payrolls data from the month prior. The data is more commonly known as “the jobs report” and it swings a big stick on Wall Street.

Especially now — many analysts believe job growth is tightly linked to the future of the U.S. economy.

Therefore, when January’s jobs report hits the wires at 8:45 AM ET tomorrow, home buyers would do well to pay attention. A net job reading that is much higher (or lower) than Wall Street’s expectations can make a serious change in home affordability.

Wall Street expects that the economy added 13,000 jobs last month. It would mark the second time in 3 months that the jobs report showed a net monthly gain.

Jobs matter to the economy for a lot of reasons, but one of the biggest is that when Americans are working, Americans are buying and consumer spending accounts for 70 percent of the economy.

Job growth spurs the economy and draws money to the stock market. Unfortunately for rate shoppers, that kind of stock market growth happens at the expense of the bond market which is where mortgage rates are made.

Mortgage rates are idling this morning in advance of tomorrow’s data. If you’re shopping for a mortgage rate, the prudent play may be to lock your rate before the jobs data is released. A jobs figure that’s higher than the 13,000 expected could cause rate to rise sharply.