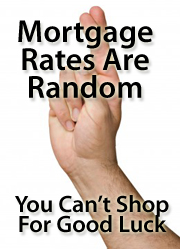 Shopping multiple lenders for a “good mortgage rate” can sometimes save you 1/8 percent on your rate and/or a few hundred dollars in fees. However, when it comes to getting the best mortgage rate, you’re going to more than good research skills.

You’re going to need some luck.

Mortgage rates are unpredictable, ever-changing, and rarely change as expected.

For example, when the Federal Reserve left the mortgage market March 31, 2010, analysts said that mortgage rates would rise by a half-percent or more. It was practically stated as fact on TV. When April 1 came around, though, rates didn’t rise.

Instead, a volcano erupted and mortgage rates dropped on safe haven buying.

Then, a week later, as the volcano ash cleared, mortgage rates were supposed to resume their rise. Only they didn’t. Instead, a debt crisis emerged in the Eurozone and mortgage rates dropped.

Since March 31, conforming mortgage rates are lower by roughly 0.125 percent, according to Freddie Mac’s weekly mortgage rate survey. At today’s rates, the savings are roughly $20 per month per $200,000 borrowed — or $100 per month based on their original, post-March 31 forecast.

It brings us to one of the most important axioms in rate shopping: You can’t shop for good luck.

Occasionally, there are days when rates do all three.

As a home buyer or would-be refinancer, what rate you get depends on at what time of day you do your shopping.

You can’t predict what will happen next in mortgage markets — even just an hour from now. Therefore, the smartest move, sometimes, is just lock your rate now. At least that way, you’ve got a guarantee.