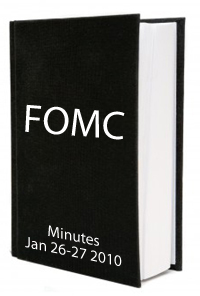 Mortgage markets reeled Wednesday after the Federal Reserve released the minutes from its January 26-27, 2010 meeting. Mortgage rates are now at their highest levels since the start of the year.

The Fed Minutes is a follow-up document, delivered 3 weeks after an official FOMC meeting. It’s a companion piece to the post-meeting press release, detailing the debates and discussions that shaped our central bankers’ policy decisions.

The Minutes is a terrific look into the Fed’s collective mind and, yesterday, Wall Street didn’t like what it saw. Specifically, the report disclosed that:

Furthermore, the Fed Minutes said that there is a growing risk of “higher medium-term inflation”. Inflation, of course, is awful for mortgage rates.

Overall, the Fed’s economic optimism appeared stronger after its January meeting as compared to its December one. A stronger economy should lead to better job growth and higher home prices throughout 2010.

Mortgage rates were up yesterday but they remain historically low. And many analysts think that after March 31, 2010, rates will rise even more. Therefore, if you’re buying a home in the near-term, or know you’ll need a new mortgage, consider moving up your time frame.

Every 1/8 percent makes a difference in your household budget.