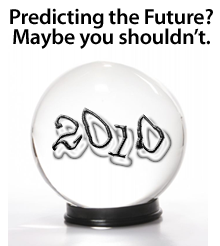 2010 is just a few days old and already the “experts” are making predictions for the year.

Given how varied their outlooks, it’s clear that the professionals have no better view of the future than the amateurs. An expert can make an educated guess, but it’s a guess nonetheless.

There’s a lot of talk on CNBC and elsewhere about what’s coming in 2010. Before you take those predictions to the bank, just remember that analysts do a much better job interpreting data from the past than projecting it into the future.

The only thing that’s certain right now is that mortgage rates are historically low, the government is giving tax credits to qualified buyers, and there’s a lot of good “deals” in housing. Make the most of what’s out there today because it will take 12 months for us to look back and know which predictions were right and which were wrong.

Until then, predictions are just opinions and guesses.