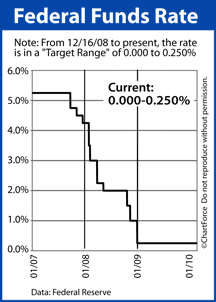 The Federal Open Market Committee ends a scheduled, 2-day meeting today in Washington. It’s the first of 8 scheduled meetings for the policy-setting group in 2010.

As is customary, upon adjournment, the Fed will issue a press release to the markets recapping its views of the country’s current economic condition, and the outlook for the near-term future.

The post-meeting statements from the Fed are brief but comprehensive. And Wall Street eats them up. Every word, sentence and phrase is carefully disected in the hope of gaining an investment edge over other active traders.

It’s for this reason that mortgage rates tend to be jittery on days the FOMC adjourns. Wall Street is frantically rebalancing its bets.

Today should be no different.

The FOMC is expected to leave the Fed Funds Rate within its target range of 0.000-0.250 percent — the lowest it’s been in history. However, it’s what the Fed says Wednesday that will matter more than what it does.

After the Fed’s last meeting in December, it made several observations:

The economy is gradually improving, the Fed told us, but there are still risks to the economy ahead. Furthermore, inflation remains in check.

As compared to December’s press release, today’s FOMC statement will be closely watched. If the Fed changes its verbiage in any way that alludes to strong growth and/or inflation in 2010, expect mortgage rates to rise as Wall Street moves its money from bonds to stocks.

Conversely, reference to slower growth in 2010 should lead rates lower.

We can’t know what the Fed will say so if you’re floating a mortgage rate right now or wondering whether the time is right to lock, the safe approach would be to lock prior to 2:15 PM ET Wednesday. After that, what happens to rates is anyone’s guess.