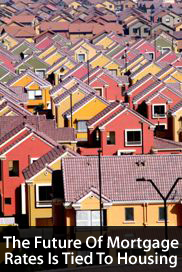 Mortgage markets worsened last week on a turn-around in sentiment across the Eurozone. The sort of “safe haven” buying that had buoyed mortgage bonds since the New Year dissipated, and mortgage rates resumed climbing.

Last week marked the first week since the end of 2010 that mortgage rates have risen, breaking a 2-and-a-half-week rally.

Conforming and FHA mortgages increased in rate by roughly 1/8 percent.

Last week was data-sparse so mortgage markets took their cues from Europe — specifically Portugal and Spain. There have been lingering concerns that the two countries might default on their respective national debts. The development has a similar feel to what transpired in Greece in April of last year, and that may be why markets are reacting in much the same manner.

At the beginning the year, the fear of default in Portugal and Spain was elevated. It drove money managers away from risky assets and toward safer ones, including U.S. mortgage bonds. Last week, however, those fears eased. Money reversed flow and, as a result, mortgage rates rose.

Truly, this is a global market.

This week, the Eurozone story continues, but there is a lot of U.S. housing data due for release, too.

Housing is considered key to the country’s economic recovery, so strength in this week’s housing should lead stock markets higher on better expectation for the economy which would, in turn, cause a sell-off in mortgage bonds, driving mortgage rates higher.

Mortgage rates are decidedly higher than their lows of 2010, but have much more room to rise. If you haven’t locked your mortgage rate yet, consider taking care of it this week.

Rates have farther to rise than to fall in the medium-term.