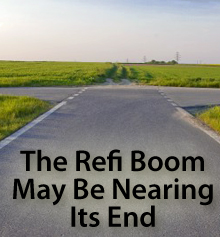 A shift in Wall Street sentiment caused mortgage markets to worsen last week. There wasn’t much in the way of new data, but the numbers that did hit the street helped quell fears of a double-dip recession.

Conforming mortgage rates rose between Monday-Friday for the first time since June, and mortgage-backed securities have now lost ground on six of the last 7 trading days.

During this period, conforming mortgage rates have risen by as much as 0.375 percent.

Mortgage rates for FHA-insured home loans are higher, too.

Remember, concern for the future of the U.S. economy was a major catalyst for low rates this summer. The drop in rates, which began in April on weaker-than-expected data, accelerated through July and August on record-low home sales and a stalled jobs market.

Lately, though, these concerns are turning to hope.

The growing optimism is putting the Refi Boom at risk. To be sure, it’s been a rough two weeks to shop for a mortgage.

This week may figure no better. In addition to the Retail Sales data, there’s key inflation data due both Thursday and Friday, plus, two consumer confidence reports are set for release.  If the overall numbers point to an “improving economy”, mortgage rates will likely rise again this week.

Momentum is moving in that direction, certainly.

If your looking for the right time to lock a rate, now may be the time. Mortgage rates are off their best levels of all-time, but still quite low. There’s lot of savings out there for homeowners who qualify.