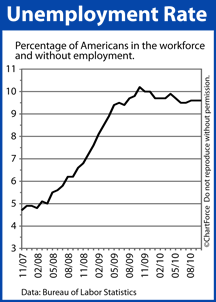 In a holiday-shortened week on Wall Street, mortgage markets improved on 3 of 4 days, but still posted its fourth consecutive losing week.

Unfortunately for rate shoppers and home buyers , last week’s 3 days of gains were mild improvements; the one day of deterioration was among the Top 10 worst days for mortgage bonds this year.

Mortgage rates are at their highest levels since mid-July. The Refi Boom is unwinding quickly.

Last week underscores the importance of the global community to the future of the U.S. mortgage market. Two of the main reasons why mortgage rates increased were non-domestic.

The two events stemmed the typical safe-haven buying patterns that accompany geo-political and economic uncertainty, and drive down mortgage rates.

First, Ireland’s bailout package was signed Sunday morning and that relieves some pressure on the European Union.  Second, this week’s economic releases should show that the U.S. economy is still expanding, and that U.S. consumers are still spending — both are tied to higher rates.

A sampling of the week’s releases include:

If you haven’t locked a mortgage rate and are waiting for “the bottom”, remember that the mortgage market waits for no one. Rates are much higher since the start of November and look ready to rise even higher.  Call your loan officer and get your application in process this week.

The longer you wait, the higher that rates could go.