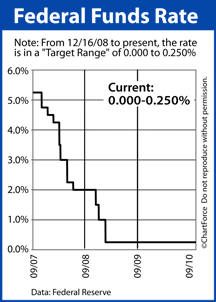 In back-and-forth trading, conforming mortgage rates bottomed out Wednesday before rising through Friday’s afternoon close. Rates still managed to eke out improvement on the week overall.

According to Freddie Mac, mortgage rates remain near their lowest levels of all time.

Despite low rates, however, rate shoppers are finding it a challenge to lock the “best price”. This is because Wall Street is conflicted about the future of the U.S. economy and, as a result, mortgage pricing has been extra volatile.

For as much data that points to economic growth, there are numbers that suggest a pullback, too. Traders are undecided in either direction and mortgage pricing reflects it. It’s not uncommon for mortgage rates to vary by as much as 3/8 percent in a given week.

This week, without much new data due for release, prepare for even swifter swings in rates. In the absence of “numbers”, momentum- and trend-trading should amplify the market’s normal drops and spikes.

Notably missing from the week’s economic calendar is the jobs report which is typically issued on the first Friday each month. The release is delayed a week to October 8.

If you’re still floating a mortgage rate or have yet to commit to a refinance, consider that mortgage rates are primed to rise. They’ve been falling for 22 weeks and when the market turns, it’s expected to turn quickly.

Talk to your loan officer about your refinance options while mortgage rates are still low.