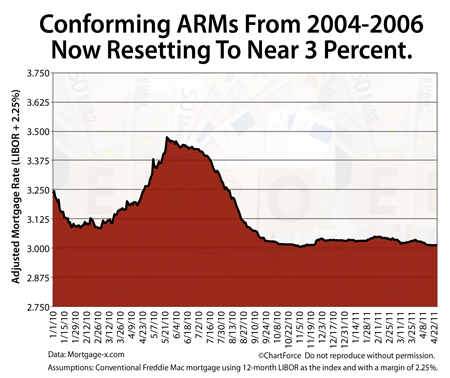 When a mortgage applicants chooses an adjustable-rate mortgage over a fixed-rate one, he accepts a risk that — at some point in the future — the mortgage’s interest rate will rise. Lately, though, that hasn’t been the outcome.

Since mid-2010, conforming mortgages have adjusted below their initial “teaser” rate consistently, giving homeowners nationwide reason to ride their respective adjustable-rate mortgages out.

For example, this month, conforming 7-year and 5-year ARMs are adjusting near 3.011 percent based on the most common loan terms of 2004-2006. It’s because of how adjustable-rate mortgages are structured.

Adjustable-rate mortgages follow a defined lifecycle. First, the ARM’s mortgage rate is pegged; held fixed for a set number of years. This period ranges from one year to 10 years; periods of five and seven years are most common.

When the initial fixed-rate period ends, the mortgage rate then adjusts based on a pre-set formula. The formula is established by contract in the mortgage closing paperwork, and is commonly defined as:

Next, every 12 months, based on the same formula as above, the ARM adjusts again until 30 years have passed and the loan is paid is full.

It’s important to recognize that in the above equation, LIBOR is a variable so as LIBOR goes, so goes your adjusted mortgage rate. And because LIBOR is ultra-low right now, adjusted mortgage rates are ultra-low, too. LIBOR is expected to stay this way until the global economy has recovered more fully. Analysts predict a higher LIBOR by mid-2012.

So, if you have an adjustable-rate mortgage that’s due to reset this season, don’t rush to refinance. For at least one more year, you can benefit from low rates and low payments.  As for the next adjustment, though, that’s anyone’s guess.