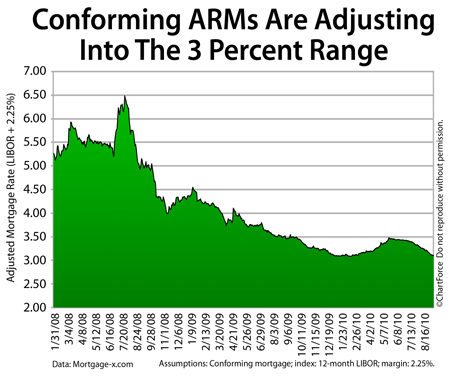 When adjustable-rate mortgages are on the verge of adjusting, a common concern among homeowners is that their mortgage rates will adjust higher.

Well, this year, because of the math of how ARMs adjust, homeowners around the country are seeing that mortgage rates on ARMs can sometimes adjust lower, too.

Adjusting conforming mortgages are adjusting to as low as 3 percent.

As a quick review, here’s the timeline for most conforming adjustable-rate mortgages:

The adjustments each year are based on a math formula that’s included in the contract with your lender. It’s surprisingly basic.  Each year, your new, adjusted mortgage rate is equal to the sum of some constant — usually 2.25 percent — and some variable.  The variable is most commonly equal to the 12-month LIBOR.

LIBOR is an acronym standing for London Interbank Offered Rate. It’s an interest rate at which banks borrow money from each other — very similar to our Fed Funds Rate here in the United States. And also like our Fed Funds Rate, LIBOR has been low lately.

As a result, adjusting mortgage rates have been low, too.

Based on the math, you may want to let your ARM adjust with the market year. Or, if you plan to keep your home long-term and have concerns about adjustments in 2011 and beyond, it may be a good time to open a new ARM.  The same forces that are driving down LIBOR and helping to keep mortgage rates low overall, too.

Consider talking to your loan officer and making a plan. With mortgage rates as low as they’ve been in history, most homeowners have options.  Just don’t wait too long. LIBOR — and mortgage rates in general — are known to change quickly.