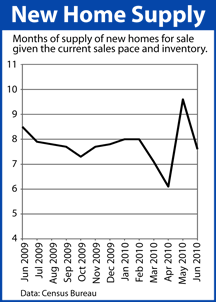 After a down month in May, the sales of newly-built homes appears back on track.

There are now just 210,000 new homes for sale nationwide.

June’s data is a major improvement over May, but it’s possible that the true “new home market” may be softer than the statistics suggest.  This is for several reasons.

Second, although much improved, June’s new home supply of 7.6 months is elevated versus the historical norm near 6.0 months.  The last year has averaged 7.7 months.

For buyers of new homes , this combination of low sales volume and higher-than-normal inventory may be a positive.  It’s the main reason why homebuilder confidence is reeling and the downturn has opened some doors for big discounts and deals. Free upgrades and closing cost credits can make a well-priced home even more attractive.

Plus, with mortgage rates at all-time lows and expected to rise, home affordability is may never be better.