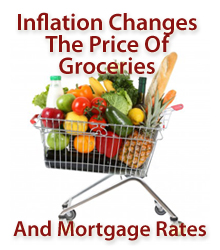 All day, every day, conforming and FHA mortgage rates are in flux.  Rates move in response to hundreds of factors which exact varying levels of influence.

But what is inflation?

By definition, inflation is when a currency loses its value; when what used to cost $1.00 now costs $1.10.

As consumers, we recognize inflation by the items we buy on a daily basis becoming more expensive.  However, it’s not that goods are more expensive — it’s that the dollars we’re using to buy them have become worth less.

With respect to mortgage rates, this is a big deal because mortgage rates are directly related to the price of a special type of bond called a mortgage-backed bond.

On Wall Street, mortgage-backed bonds are priced, bought, and sold in U.S. dollars so as inflation renders those dollars less valuable, so it does to mortgage-backed bonds as well. It’s a chain reaction by which mortgage bonds lose value, leading investors sell them, causing bond prices to fall on the excess supply.

Lately, inflation has been exceptionally low. The Federal Reserve acknowledged as much in its last statement to the markets, and available data backs that position.  This, after predictions that inflation would be “runaway” in 2010.

The Cost of Living is up just modestly this year and it’s helping mortgage rates stay low. And, so long as it lasts, the cost of owning a home will remain relatively inexpensive.