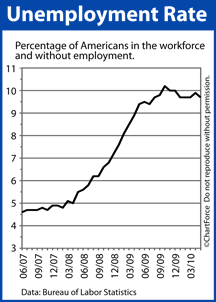 On the first Friday of each month, the Bureau of Labor Statistics releases its Non-Farm Payrolls data from the month prior.

The release is more commonly called “the jobs report” — a major factor in mortgage rates and monthly payments.

With the recession officially over and growth returning to the U.S. economy, the recovery’s next frontier is jobs. As job growth increases, home affordability should take a hit.  Here’s why:

Furthermore, as the jobs market stabilizes and recovers, renters should be more apt to buy their first home, and homeowners should be apt to up-size.  More home buyers means more competition for homes and higher home prices typically follow.

Job growth can be trickle-up for housing.

Today, however, the jobs data was not so strong. According to the government, 431,000 jobs were created in May, but of those new jobs, 95.4% represented temporary staffing for the 2010 Census.  The number of private-sector jobs created fell well short of expectations and Wall Street is voting with its dollars right now.  Mortgage bonds are gaining so, therefore, rates are falling.

The May 2010 jobs report may not reflect well on the economy, but home affordability around the country is improving because of it.