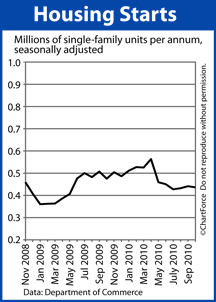 Newspaper stories can be misleading sometimes — especially with respect to real estate. We saw a terrific example of this Wednesday.

A “Housing Start” is a privately-owned home on which construction has started and, according to the Commerce Department’s October 2010 data, Housing Starts data dropped by nearly 12 percent as compared to September.

The media jumped on the story, and its negative implications for the housing market overall.

A sampling of the headlines included:

Although factually correct, the headlines are misleading. Yes, Housing Starts fell sharply in October, but if we strip out the volatile “5 or more units” portion of the data — a grouping that includes apartment buildings and condominiums — Housing Starts only fell 1 percent.

As an illustration, 84% of October’s Housing Starts were single-family homes. The remaining starts were multi-units.

This is why the headlines don’t tell the whole story. The market that matters most to buyers — the single-family market — gets completely glossed over. The Housing Starts reading wasn’t nearly as awful as the papers would have you believe.  Furthermore, it’s never mentioned that single-family Housing Permits climbed 1 percent last month, either.

According to the Census Bureau, 82% of homes start construction within 60 days of permit-issuance. Therefore, we can expect December’s starts to be higher, too.