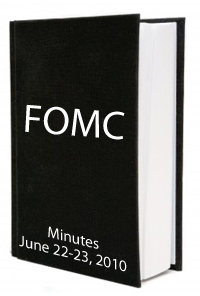 According to Freddie Mac, mortgage rates made new all-time lows this week and the good news is that rates look poised to fall even more.

Since the Federal Reserve’s release of its June 2010 meeting minutes Wednesday, mortgage rates are dipping even more and one of the main reasons why is because of some choice Fed words.

If you’ve never seen a Fed Minutes release, it reads academic. The document is page after page of stats, facts and figures about the U.S. economy, accompanied by an in-depth recap of the intra-Fed member debates that shape the nation’s monetary policy.

As it turns out, Wall Street didn’t like what it read in the minutes.  Specifically:

Furthermore, the Fed said its action may be needed if the economy were “to worsen appreciably”.

Overall, the economic optimism the Fed displayed earlier this year appears to be waning. The economy is moving forward — just not as quickly as expected.  That should bode well for mortgage rates and home shopping.

Mortgage rates were down Wednesday afternoon and Thursday and remain historically low. All it would take to reverse rates, however, is a run of positive news on jobs, growth, and consumer spending.  Therefore, if you know you need to lock a mortgage rate in the near-term, it may be a good time to make the call.

Lock your mortgage rate and move on.