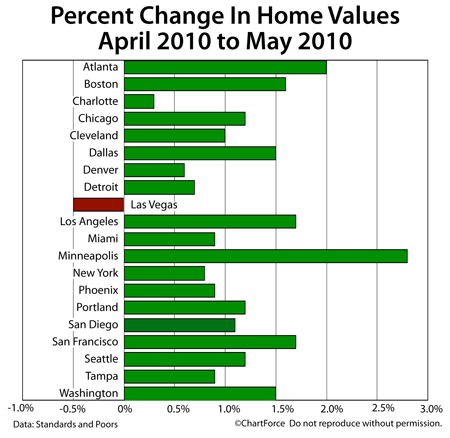 Standard & Poors released its Case-Shiller Index Tuesday. On a seasonally-adjusted basis, between April and May 2010, home prices rose in 19 of Case-Shiller’s 20 tracked markets.  It’s the second straight month of strong Case-Shiller findings.

Also, May’s numbers are a mirror-image of February’s. In February, 19 of 20 markets lost value.

In its press release, the Case-Shiller staff resisted calling May’s data proof of a housing recovery, noting that home values remain flat as compared to October of last year. However, there are some noteworthy numbers in the Case-Shiller report.

These are all good signs for the housing market, but the Case-Shiller Index is not without its flaws. Most notably, the data is limited to just 20 cities nationwide — and they’re not even the 20 largest ones.

Cities like Houston, Philadelphia, and San Jose are excluded from Case-Shiller, while cities like Tampa (#54) are not.

Another Case-Shiller flaw is that it reports on a 2-month delay.

Therefore, today is several days from the start of August but we’re now reflecting on data from May. Given the speed at which the real estate market can change, May’s data is almost ancient.  Today’s values may be higher or lower than what Case-Shiller reports.

For home buyers, reports like the Case-Shiller Index may not be useful in making a “Buy or Not Buy” decision, but can aid in watching longer-term trends in housing.  For real-time data, talk to a real estate agent with access to local figures instead.