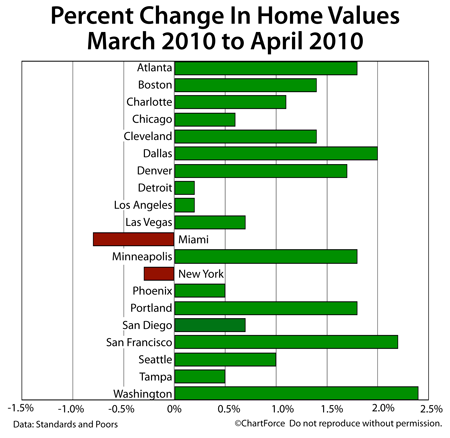 Standard & Poors released its Case-Shiller Index Tuesday.  The index is a monthly home valuation report from select cities and among the private sector’s most popular home pricing models.

In reviewing the April Case-Shiller Index and its accompanying analysis, it appears that the housing market’s rebound is gathering momentum.

In the index’s 20 tracked cities:

Furthermore, as another sign of strength, San Diego, a city in which homeowners have lost a lot of equity since 2007, has now shown 12 straight months of home price improvement.

However, the Case-Shiller Index must be kept in context. It’s far from perfect.

For one, the index reports on a 60-day delay; it’s only now showing data from the end of April, when the federal homebuyer tax credit was expiring. Home sales have been weak since then it’s been reported.

But, despite its flaws, the Case-Shiller Index remains important with respect to economic analysis. Much like the government’s Home Price Index, Case-Shiller helps to identify broader trends in housing that shape government and monetary policy.